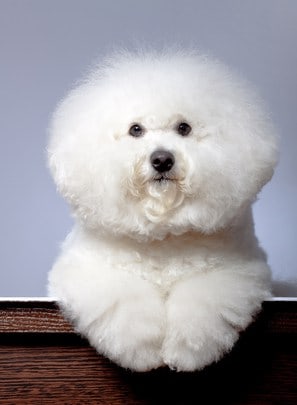 One of the reasons owners love their Bichon Frise dogs is for their much vaunted looks. A perfectly groomed Bichon Frise is a class apart.

Conversely, a poorly groomed Bichon will quickly develop matted fur that will not only look ugly but will contribute to skin diseases.

In short, a Bichon Frise is a dog that requires daily grooming.

Here are some tips that will help you do it right.

A pup will not need as much grooming as an adult primarily because his coat is not completely formed. But it’s really important to get him used to the idea of standing still for a period of time.

So, start your Bichon Frise grooming routine as early as possible. Figure out the best time of day to carry out the ritual, then stick to it religiously. The idea is to ingrain the routine into your pet’s mind to the point where he reminds you in the unlikely event that you forget.

2. Use The Best Tools

Your Bichon Frise grooming must be supported by superlative tools. Excellent tools not only make your task easier, but also place less physical stress on your pet. Additionally, because they allow you to accomplish tasks quicker, your Bichon Frise will also face reduced emotional stress. Here are the key tools that you should acquire:

Additionally, for non-coat-related grooming, make sure you have toenail clippers along with styptic for toenail bleeds, a toothbrush and toothpaste.

Brushing a dog can be accomplished with the dog standing or lying on its side; the choice is yours, but once you are comfortable, stick with whichever stance you have chosen. You pet should be trained to remain immobile during this.

Start with the pin brush, gently removing the smaller knots. Brush the hair on the back and sides towards the spine; on the head, brush towards the nose.

Similarly, brush the legs, ears and tail in a direction to fluff out the fur. Where the fur is long, consider multiple passes, initially brushing out tangles from the ends, then gradually going in closer to the skin. Your brush will pick up dead hair; you will need to clean your brush off such hair every so often.

Follow the pin brush grooming with the greyhound comb, gently working out knots. Use the scissors to trim fur, as required.

Schedule your pet's bath to follow his daily brushing.

Monthly bathing should, in most cases, be sufficient. It would be unusual to have to bathe a Bichon more frequently than once a week. Ensure that you use a shampoo and conditioner that is specifically made for dogs as the human variety does not suit them. Thorough rinsing is a must as residual shampoo can affect the coat and the skin.

When drying, first towel him off well, then brush his coat free of any left over tangles. Finally, use a blow dryer on the gentle setting while simultaneously using the slicker brush to keep his fur straight.

Most veterinarians, especially dentists, now recommend daily brushing of your dog’s teeth. Like with other grooming, the earlier you get him used to the idea, the easier the chore will be. An electric toothbrush is ideal and there are an excellent range of toothpastes made specifically for dogs.

All dogs needs their nails trimmed every two weeks or so. Like humans, dogs’ front limb nails grow quicker than their rear toenails.

A Bichon Frise does require professional grooming on a regular basis. Most professional dog groomers suggest a visit every four to six weeks during which your pet will be given the full treatment — brushing followed by a haircut, a thorough bath and a final scissoring to get that special look.

Many groomers suggest that 30 minute appointments approach the limits of a dog’s tolerance, so some prep work on your part will help prevent the need for a second visit.

The Bichon Frise was the darling of the French and Spanish courts primarily because of its looks. Unfortunately, such looks are not quite as natural as, perhaps, one would like. So, make no mistake, the Bichon is a high maintenance dog.

There’s work that’s part of the adorable package; a lot by you and some by your favorite dog groomer. Of course, you just know that he’s worth it.

Next post: How To Choose A Dog That Makes The Perfect Pet