The Harrier Dog temperament is close to that of his beagle cousin in that he loves to sniff out prey.

Then, after finding it, there’s nothing he loves to do more than get back out there and hunt some more. 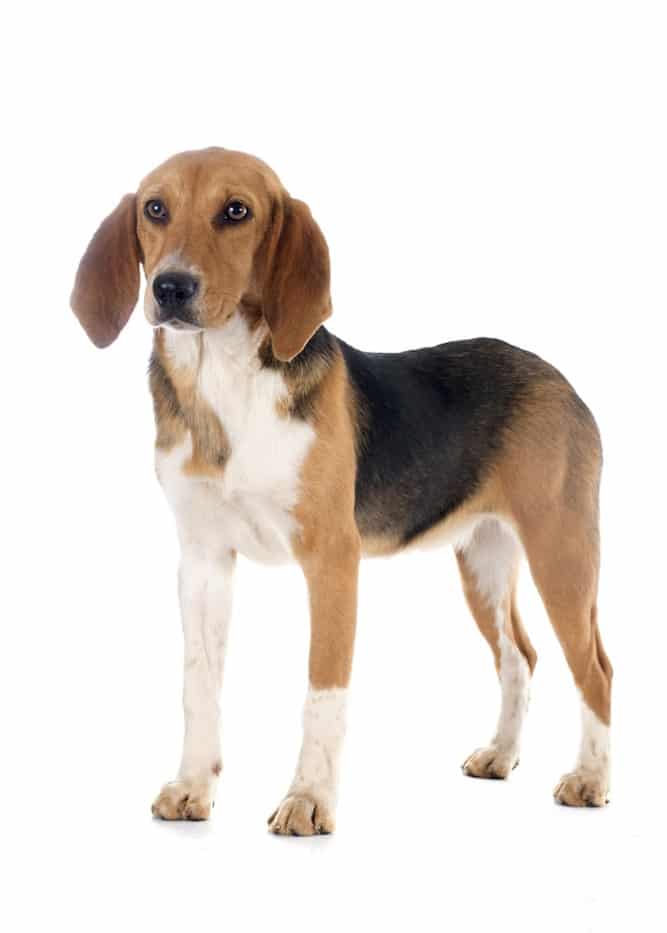 A Brief History of the Harrier Dog Dog Breed

No one is quite sure how the Harrier Dog came to be. A few theories include a cross that somehow involves an English Foxhound.

Harrier Dog puppies originated in England. However, the country to this day does not recognize the Harrier as an official breed.

In a contest of Harrier Dog vs Beagle, it can be difficult for someone inexperienced to pick the Harrier. This is because they look very similar, to the point where the Harrier’s nickname is “Beagle on steroids.”

There are six traits you must know about the Harrier Dog temperament. These traits are more clearly outlined below.

The Harrier will make sure you know he’s open to being your friend.

If you’re normally reserved around or scared of dogs, the Harrier may keep nudging you until you love him. (And love him you will!)

He gets this from his pack mentality. He’s used to working on a team, and he loves to find new recruits to join!

The fact that he’s outgoing makes it a given that he’s also friendly.

And because he has such a friendly demeanor, he is great with children.

The earlier and more frequently you socialize him, the better. The more socialization he gets, the friendlier he will be.

The Harrier is a happy dog. He’s at his most cheerful when he’s spent the entire day outside.

And the cherry on top of the cake for him is when he can go inside and spend time with his family.

However, if you leave him alone for too long, that cheer disappears. He’ll bark incessantly or bay at the moon until you return. 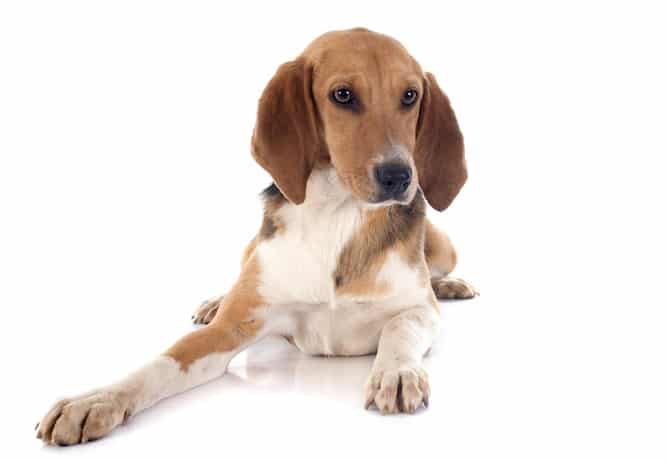 Like many hounds, the Harrier is a sweetheart by nature.

This is the same sweetness that may make you want to cave when you’re training him and he’s being stubborn.

He doesn’t realize he’s manipulating you into giving him a pass this time…or does he?

It’s important to be patient when you’re a hunter. If you jump too quick, your prey will escape.

This is one of the reasons why the Harrier is such a great hunter. He has a strong patience streak that serves him well.

This is a dog that will follow his nose wherever it leads him.

Because of his strong prey drive, he can’t be around animals that aren’t dogs.

So if you already have cats, hamsters, or other small pets, the Harrier may not be the ideal pet for your household.

He is not one to give up easily, especially when he’s in hunting mode.

His alertness also makes him a good guard dog – but only while you’re around.

He’ll bark to let you know if a stranger is near. But if you’re not home, he won’t try to stop someone from coming into your house.

This is a situation where his friendliness can actually work against him. 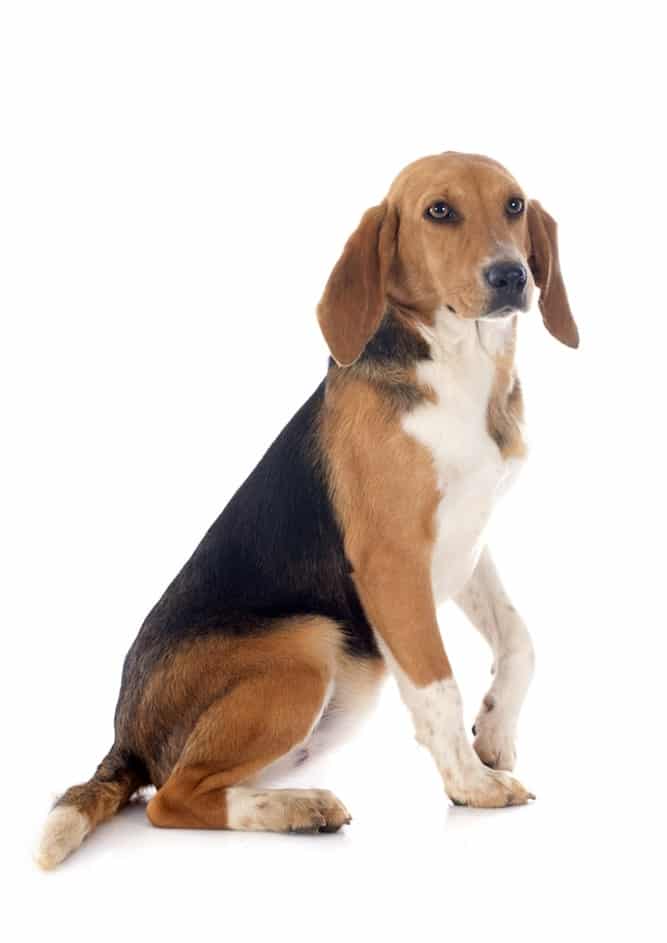 Harrier Dogs are, like other hounds, are loving dogs who want to do right by their masters. However, they also have a stubborn streak a mile long.

You must be patient and consistent. You must also have a clear understanding of the Harrier Dog temperament to make the process as smooth as possible for both of you.

You have to walk the line between being firm, but calm, and loving. You must show him that you are the leader here, not him.

If you can afford obedience classes, then these are a good investment toward his future of being a well-adjusted dog.

An excellent training program that will help you make progress despite your Harrier Dog's stubbornness is The Online Dog Trainer.

Grooming a Harrier is a pretty easy job. Because it is both short and glossy, it repels dirt easier than shaggier coats do.

A weekly brushing is sufficient. Bathe him when you notice that not-so-pleasing wet dog odor coming off of him.

You should also pay close attention to his ears. Use gauze with an ear cleaner to do the job.

If you’re unsure of a good ear cleaner to use, consult your veterinarian or breeder for a recommendation.

The Harrier temperament makes him a dog that needs exercise.

His history involves spending long days in the field, chasing after prey, and this is still in his blood today.

If he doesn’t get enough exercise every day, he can become bored. And a bored puppy is a destructive puppy.

So long as you properly exercise him, he can essentially adapt to any living situation.

Because he has a strong prey drive, you should keep him on a leash for walks. The only time you should let him loose is when he is in a secured area, like a fenced-in dog park.

The Harrier’s life expectancy is between 10 and 12 years.

Most Harriers are perfectly healthy. However, you must be aware of the health conditions that can affect this particular breed.

More specifically, a Harrier can suffer from the following conditions and diseases:

Note: Help yourself give your Harrier Dog the bests help possible. The Ultimate Guide to Dog Health is an excellent resource will help you recognize and prevent many health issues before they become problems.

So you've decided you'd like to make a Harrier Dog puppy your newest family member. How do you go about doing that, you may wonder?

First, you must decide whether you’d rather buy a dog from a breeder or adopt one from a local shelter.

Things to consider include the age of the dog and how much you are willing to pay for a Harrier.

This is a pretty affordable price when compared to other breeds. There is a range because prices can vary, depending on the dog’s bloodline and the breeder’s location.

A Harrier Dog for sale is available for purchase from a breeder or adopted from a shelter or rescue organization.

If you would like to adopt a Harrier Dog, call your local rescue organizations and adoption shelters to check availability.

Dogs available for adoption and rescue are typically older dogs. This is beneficial if you don’t want to deal with the problems that can come with a puppy, like housetraining.

Because these organizations are not breeders, they can only offer those dogs that come into their care. For this reason, you may have to keep checking back if you can’t find a Harrier right away.

If you’re happy to settle for a Harrier Dog mix, then you may have better luck.

This is because a majority of the dogs that end up in rescue and adoption shelters are mutts. Fewer people are willing to part with a purebred they paid good money for.

Even though they’re a more affordable breed, you may find it difficult to pay for a Harrier. You may have to save money for a few months in order to be able to afford one.

For this reason, you want to be especially careful that you spend your money in the right place. You don’t want to invest in a dog that may have health problems, thanks to a shady breeder.

A good resource to consult is the Harrier Club of America. They put their name behind a list of reputable breeders they recommend if you’re in the market for a Harrier.

A Final Word about the Harrier Dog

The Harrier Dog breed looks very similar to the Beagle, only larger.

His temperament makes him a hunter to his core. He loves nothing more than long days spent in the field, hunting small prey.

The Harrier Dog price tag is rather affordable, compared to other breeds.

If you’re interested in purchasing a Harrier Dog puppy from a breeder, make sure you’re dealing with someone reputable. Else, you may end up spending hundreds of dollars for a sick dog.