How To Discipline A Dog… The Right Way

Why disciple a dog you ask? Well for starters when dogs are born, they do not instinctively know how to live in a human world. As a result, there is bound to be some dog-human communication issues that come up from time to time.

Discipline can be one way to help your dog understand that some of his more inappropriate canine behaviors are not acceptable. Some of these behaviors can include:

But before we can even begin discussing how to discipline a dog, we must first understand a few key pieces of canine learning theory.

Just because sit means sit in obedience class, does not mean they will associate the command “sit” with putting their rear on the ground inside your living room too.

With this in mind, be sure to Set your dog up for success

Meet your dog in the middle and show him what is expected of him before he has a chance to do something wrong.

For example, if your dog normally goes potty in your backyard, but you take him to your parent’s house and he has an accident that may be because he has not made the association between a “house” and a “yard” and which is safe to go potty in. So take him to go potty before he goes inside and praise him for his good potty behaviors.

2. Understand what is considered a “Reward” to a dog 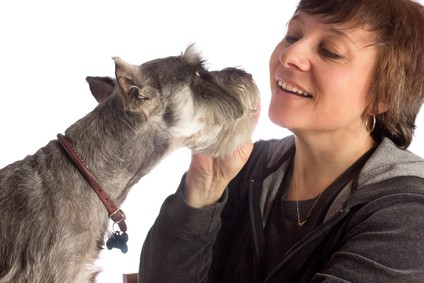 Alone, a single dog or wolf cannot take down a large enough prey to sustain it, so dogs and wolves live in packs to guarantee their survival. If an individual acts up and the survival of the pack is threatened, it will be chased off by the alpha and ostracized from the pack. This essentially gives the lone dog or wolf a “death sentence.”

On the flip side of that coin, a reward to a dog can be any form of contact, whether it be touch, talking to them and vocal praise (“what a good boy!), eye contact, something enabling their survival (food, water, shelter), or something that gives them pleasure (a walk, a toy, or treats).

Now we can understand why a dog that is yelled at, hit, abused, beaten, or scolded will still return to his punisher- even negative attention is still attention, and in the dog’s mind that is far better than no attention at all.

So What Is Discipline Then?

According to the Merriam-Webster Dictionary,discipline can be described as any act used “to punish or penalize for the sake of enforcing obedience and perfecting moral character.”

If discipline is used to provide the dogs with boundaries to help him learn to live with us and to prevent him from doing things that may cause him harm, discipline can be a useful tool.

But if discipline is being used to alleviate our own frustrations and anger, it can not only be dangerous for you, but it can impact your dog both physically and emotionally.

Remember, dogs have teeth and when a dog feels threatened, he just may use them.

The dog-human bond is a special one, and when you lay a punishing hand on your dog, you chip away at that bond and replace it with fear or aggression.

When you co-exist with a dog, especially during the training and puppy-raising phase, you need to exercise patience and try to understand that dogs do not possess the same emotions as humans do.

Dogs are dogs, and they do dog things.

Sometimes you need to ask yourself what YOU might be doing to cause your dog’s bad behaviors. For example, dogs chew to alleviate teething pain or boredom.

You can resolve this simply by

Sometimes it’s that all it takes: simply understand and meet your dog’s needs.

When to Discipline Your Dog

It is important to know when it is acceptable to discipline a dog. Generally, dogs only associate an action with an outcome 1-2 seconds after the action is finished.

Therefore, discipline should only occur while they are IN THE ACT or immediately after they have done something wrong. If you wait any longer than a few seconds, the dog will not understand why they are being punished.

How to Discipline A Dog – 5 Methods To Try

To discipline a dog you should NEVER EVER resort to physical violence. For example:

Instead try these safe methods to interrupt his inappropriate behavior, followed by showing what correct behavior you want him to do instead. 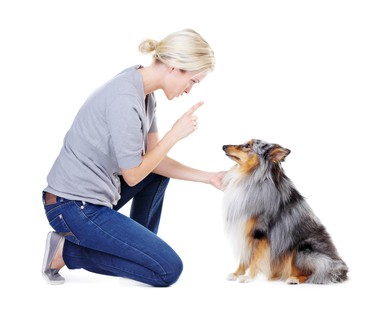 This is a simple sound you can make that is not used unless he is doing something wrong. It should be used forcefully enough to get his attention.

If your AH-AH is not strong or loud enough to get his attention add either a foot stomp on the ground or a clap. Or if you want an extra scary “AH-AH of Doom,” do all three at the same time.

Once you have his attention, re-direct him into doing something good. My rule of thumb is, if you are going to show him the bad, follow it by showing him the good which is what he SHOULD be doing instead.

Fill a clean squirt bottle with water on the spray setting, and squirt your dog whenever he is doing something he shouldn’t be doing, paired with an AH-AH (see above).

If you give the AH-AH right before the squirt, you can eventually wean off of the bottle, which can be cumbersome to carry with you all the time. Be advised that this method may not work with water loving breeds, such as Labradors or Retrievers.

If you are training a “Leave-It” command, you can turn the bottle to the mist setting and spray the air just in front of your dog’s nose to leave the forbidden item alone.

Note: I have heard of some trainers adding a small teaspoon of vinegar to their spray bottle for the mist setting to add a nasty smell to it. Sometimes you never have to go that far when I pair the bottle with an AH-AH, but it is another tool for your arsenal.

Take a clean, empty soda can and fill it with pennies and tape the mouth closed. Leave several around your house so there is always one nearby.

When your dog is doing something he shouldn’t be doing and he is at the far end of the room, you can toss the shaker can close to him (be sure not hit him) paired with an “AH-AH” or a “Leave it!” command. The noise of the can should startle him.

If you have given correction after correction and the dog is still continuing with a bad behavior, such as barking at the door even after you asked him to stop, a time-out may be warranted.

You can put the dog in the bathroom, the laundry room, or somewhere he can be by himself without getting into trouble and leave him alone for no more than five minutes.

If you leave him on time-out any longer than five minutes, he will not understand what he did to deserve it.

Be sure not to lock him up in his crate, his playpen, or any other area designated as his sleeping quarters or he will not go in easily the next time you need him to.

Generally I reserve the entire five minutes only for the most heinous of crimes (cat chasing, fighting, etc). If your dog serves his time and is not barking, whining or making any noise or scratching at the door, I will have him “earn his freedom” by performing an easy command such as “Sit” or “Down” and then I let him out.

However, if you get to the door and he is barking and carrying on, stand at the door and ignore the dog and do not let him out until he observes at least three seconds of silence.

If you let him out and he returns to the bad behavior, right back into time out he goes. After a few time-outs he will get the message loud and clear.

If your dog is on leash, you can give a quick leash snap paired with an AH-AH. This is especially useful if your dog does not get along with other dogs and he is fixated on another dog.

The leash snap can be enough to break him out of his locked stare and get him focused on you long enough to redirect his attention to something more positive.

You can also try clipping a long 6+ ft leash and let your dog drag it behind him while he is in the house. That way if he starts doing something he shouldn’t be doing, you can give him a quick leash snap no matter how far away he is.

Just be sure he cannot get his leash tangled on something. DO NOT use this method if your dog has access to a balcony or homes with more than one floor that he could jump or fall off.

For any of these methods to be used successfully, they must be startling enough to interrupt the bad behavior.

If your dog is in the middle of chewing on your shoe and you implement one of these methods but he continues happily chewing away, then your method was either not used forcefully enough or you need to try another method to break the behavior.

Next post: Yorkshire Terrier Temperament: Do You Want a Yorkie Puppy?

Previous post: Sniffing Out the Bloodhound Temperament – As Good-Natured As It Gets