The Sealyham Terrier temperament makes him a really good hunter among other things. However, he can also be a bit of a challenge to train, as he can be very stubborn. 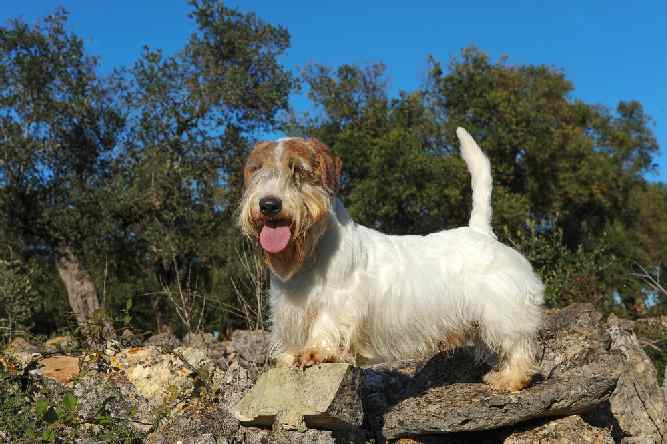 There are five essential traits that make up the Sealyham Terrier temperament, and they are:

The Sealyham is not as rowdy or rambunctious as other Terriers. He is less likely to fly off the handle for no reason.

In fact, he would much rather act like a clown for your amusement. He may just surprise you with how much personality he can fit into such a small body!

He is not a very demanding dog. And while some Sealyhams can be problematic insofar as their interactions with other dogs, once they’re properly trained, they’re among the calmest of the Terrier breeds.

For this reason, experts actually recommend the Sealyham as one of the better choices for the elderly. They’re calmer dogs who don’t require a lot of maintenance to feel satisfied.

This breeds alert temperament trait can be problematic if the Sealyham is not taught how to interpret situations.

For instance, an untrained Sealyham may give chase with another dog who otherwise did not pose a threat.

And speaking of being alert, the Sealyham's bark is surprisingly deep, compared to the yappy sound you may expect to hear coming from a Terrier.

One thing’s for sure: When a Sealyham barks,  you are bound to listen! 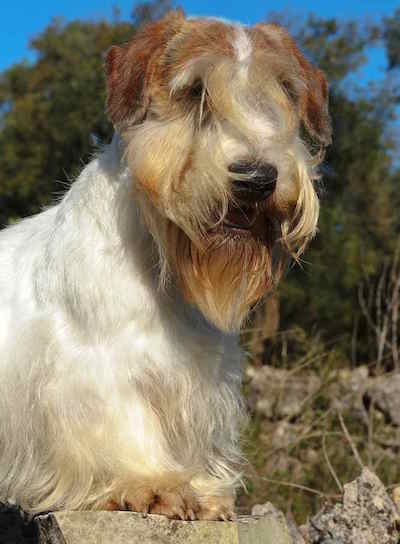 His smaller size does not deter him from hunting whatever prey catches him by the nose.

For this reason, it is imperative that you keep him in a fenced-in area or on a leash whenever he is outside. There’s nothing stopping him from taking off after a scent and ending up either in the road or far from home.

Another area where a fearless dog can become a problem is training. If he thinks he can walk all over you, he will.

Show him you are his leader, don’t take any of his guff. Keep him in check, and he will learn to listen to and respect you.

His outgoing personality can be one of his most admirable traits, so long as you do not allow him to take it to the next level.

The Sealyham displays a friendly temperament with his family and those he knows. Although he may act aloof with strangers until he gets to know them better.

Sealyhams may become scrappy with other dogs and animals, particularly other dogs of the same sex. This is not uncommon for Terriers.

In addition to accepting a challenge, he may also decide to initiate a fight with another dog. This is why early socialization is so important.

However, it is also important to note that the Sealyham is less confrontational than his Terriers cousins are.

The key is socialization. The more you socialize him, the friendlier he will be.

A Brief History of the Sealyham Terrier Dog Breed

Sealyham Terriers get their name from the Sealyham Mansion – the Welsh home where Captain John Edwardes developed the breed.

Edwardes combined the Welsh Corgi, the Wire Fox Terrier, and the now extinct English White Terrier to create the Sealyham.

Originally, Edwardes used the Sealyham to hunt small prey and to eliminate pests. After the First World War, however, the breed’s popularity soared.

During this time, it became fashionable for Hollywood celebrities to own the Sealyham as pets. 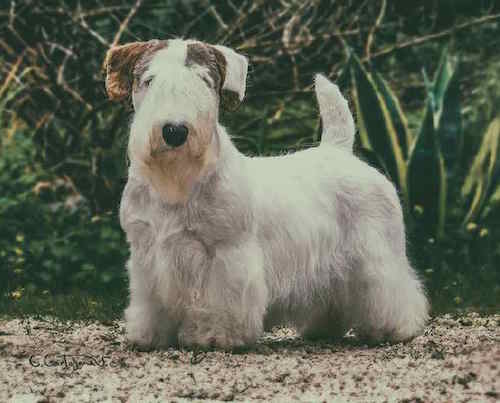 When it comes to training Sealyham Terrier pups, perhaps the most important thing to be aware of is food aggression. Sealyhams may show toy aggression, too.

If you see signs of these forms of aggression, you must teach him the proper behaviors and nip this aggression in the bud. If you don’t, then you may never be able to have another pet or even a child around him while he’s playing or eating.

Socialize your Sealyham early and often, else he may become aggressive with other dogs later in life.

Be firm with him, but not harsh, and refrain from teasing him. If you resort to physical punishment, this will only cause him to reject you further and perhaps even retaliate.

A Sealyham Terrier can certainly be a stubborn one when it comes to training. Don’t think twice about bringing him to obedience classes if you need the help.

If you are up for the fun and challenge of training your Sealyham then check out  The Online Dog Trainer.

You must comb and brush the Sealyham every two or three days, including his legs. This is because he tends to develop mats easily.

He does not shed, so you must hand-strip or clip him regularly.

If you do not feel comfortable doing this, then you must take him to a professional groomer. The groomer can also show you how to do this to help you save some money.

You should also trim the Sealyham’s coat, as this makes him much easier to care for.

Give him a bath every three to four weeks, and regularly check and clean his eyes and ears.

Sealyhams love to run. Though, be careful with him in the summer, since he can overheat easily with all that fur.

Because he loves to do most of his running outside, you will frequently have to contend with his coat getting grass-stained. If that’s the case, you may have to bathe him more often.

You want to exercise him to the point where he’s used up his excess energy, but not to the point of exhaustion.

Basically, you just want him to be calmer in the house, so he doesn’t resort to destroying everything or becoming a menace. Exercise has positive effects on dogs with behavior problems.

The health issues that are more likely to appear in Sealyham Terriers include:

Thankfully, none of these problems are major, but it is still important that you remain aware and vigilant nonetheless.

The Sealyham Terrier’s life expectancy is between 12 and 14 years.

Note: Few things are more important than our Health. It's no different with our Dogs Health. Some visits (and Money) to your vet can be avoided if only you know what to when your dog is ill. The Ultimate Guide to Dog Health is the answer. No dog owner should be without this handy guide. It's no substitute for your Vet but it will Save you Money. And help you quickly understand and recognize symptoms before they become a serious problem for your dog.

So, you've decided to add a Sealyham Terrier puppy to your family. Congrats!

You can either go through a breeder or a rescue or adoption agency – whichever you’d prefer, and whichever your budget will allow. 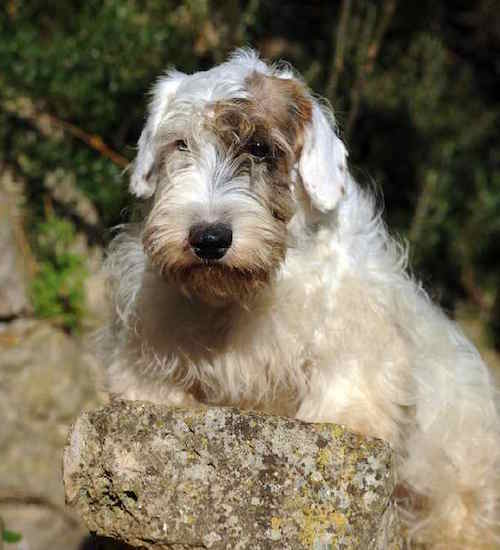 The average Sealyham Terrier price is around $800.

The price of a Sealyham Terrier for sale may vary, though, with some breeders charging up to $2,000 per puppy.

If you want to adopt a Sealyham Terrier puppy, start by contacting your local rescue organizations and adoption centers.

If you’re interested in a Sealyham Terrier mix, adoption may be a better option. Mixes are typically available more often for adoption than through a breeder.

The Sealyham Terrier Club of America may be able to provide you with some important information regarding Sealyham breeders in your area.

For example, you will find a list of breeders throughout the country that specializes in Sealyham Terriers.

Make sure when you speak to the breeder that you ask if the breeder tested the puppy’s parents for Lens Luxation. This will give you a better idea as to whether their puppies might have inherited the condition.

Conclusion: Why the Sealyham Terrier?

He is a great hunter. And packs a strong bark that can startle the unsuspecting or unaware visitor.

The Sealyham Terrier is fortunate to not have any major health concerns that you should worry about.

You can expect to enjoy life with your Sealyham Terrier for 12 and 14 years.

You may find it difficult to train him due to his stubbornness and possible food or toy aggression. If it’s too much for you to handle, enroll him in obedience classes.

What you can do is exercise him regularly to help him burn off some steam and socialize him often to help him get used to other people and dogs.

The average Sealyham Terrier cost is between $800 and $2,000, but you can save considerably more money if you choose to adopt.

Next post: The Keeshond Temperament: A Delight for Any Pet Owner

Previous post: The English Setter Temperament (Playful, Mischievous): Could You Love Her as Much as She’ll Love You?