Spinone Italiano Temperament: Add a Bit of Culture to Your Home with This Italian Sweetheart

The Spinone Italiano temperament makes him a tough hunter with a soft inner core. He’s a gentle, docile family pet with a mind of his own when it comes to hunting and training.

The Spinone Italiano temperament makes him one of the sweetest dogs you could ever own.

Specifically, here are the traits that make him oh-so-lovable:

You wouldn’t believe that the Spinone is the same dog at home as he is in the field.

When he’s home, he’s the sweetest, most companionable dog you could own. When he’s in the field, however, he will stop at nothing to capture the game that he’s after.

The Spinone loves his family and would do anything for them.

While not a protective dog by nature, the only time he would even think of attacking anyone is if they directly attacked him or his family.

If you’re looking for a guard dog or watchdog, the Spinone is not it.

He loves everybody. He loves his family, his friends, acquaintances he sees on his regular walks. He even loves people he hasn’t met yet.

He has a kind of naïve affection for anyone that crosses his path – provided it’s not an animal he would consider game, of course.

He is a happy dog who loves to clown around. 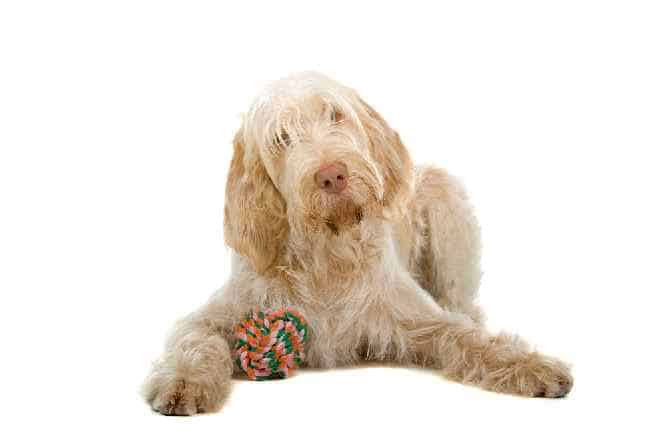 Some dogs love their families but don’t really show them affection. With the Spinone, you never have to question how much he loves you.

His patience is what makes him such a great hunter. He knows that if he acts too quickly, then he will give up his position, and his game will be gone forever.

This kind of patience translates well to home life when combined with his gentility, he makes for a wonderful pet to have around children.

His gentle nature makes him the perfect family pet.

He will never try to boss you around or whine when he doesn’t get what he wants – unless he does not see you as his pack leader.

This is why it is important to establish early on that he answers to you – not the other way around.

A Brief History of the Spinone Italiano Dog Breed

Experts also believe the Spinone is one of the oldest gun dogs still alive today.

The Spinone almost became extinct during the Second World War when hunters started using other breeds to do the same job the Spinone was doing.

The breed gets its name from the spino, which is the name for an Italian thorn bush. This kind of bush would protect bigger game who would hide from hunter dogs who could not make their way through the branches.

The Spinone was the most successful at doing so and thus earned his name.

Training a Spinone Italiano is a bit trickier than training other breeds. This is because he won’t do what you say without a valid explanation.

They are smart dogs for sure, but if they don’t feel like doing something right now, they won’t.

For instance, if you’re trying to teach him to jump up, he’ll be like “why here? Why now?” It’s not that he can’t do it, he would just rather do it later if it makes more sense to do it then. 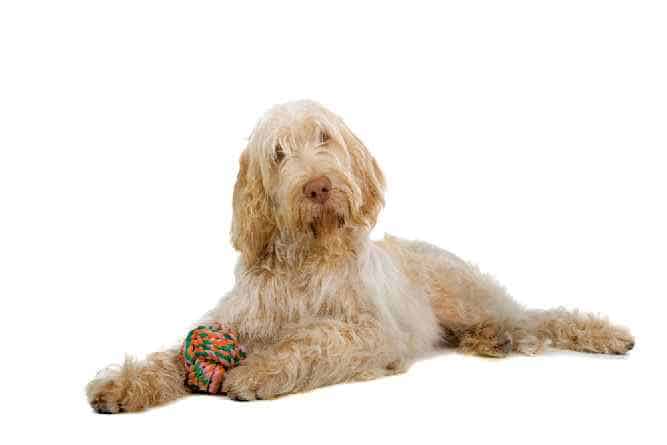 He has a good hunting instinct, but he’s not a hunter’s dog. What this means is that he would rather do his own thing than trust where you tell him he should go.

At the end of the day, he will bring you the same deer you want him to go after. He just has his own methods of doing so and wants you to put your trust in him that he can do it.

Some say that you should keep the Spinone Italiano “in his natural state,” but this doesn’t mean that you can get away with not grooming him at all.

Make sure that his coat is always at a length of between 1.5 and 2.5 inches long.

You must clean his ears once a week to prevent infection, and you should regularly trim his tail to prevent “feathers.”

As far as Spinone Italiano shedding goes, hand-stripping is more effective at removing the dead hair from his coat than scissoring it.

If you’re not into hiking or walking your dog every day, then the Spinone Italiano is your buddy.

All you really need to keep him happy is a large, fenced-in yard, and a bunch of time to play in it.

He is not a “kennel dog,” which means he’s not the kind of dog you can just leave outside.

He prefers to play with his family, so tossing a ball into the yard and setting him free just isn’t going to cut it with the Spinone Italiano.

Typically, an Italian Spinone puppy is a pretty healthy dog.

However, there are certain health issues you should know about. The most major of the concerns is Canine Hip Dysplasia (CHD), but that’s thankfully the worst of it.

Other, more minor conditions you should look out for include:

The Spinone Italiano's life expectancy is between 12 and 14 years.

Note: Few things are more important than our Health. It's no different with our Dogs Health. Some visits (and Money) to your Vet can be avoided if only you know what to when your dog is ill. The Ultimate Guide to Dog Health is the answer. No dog owner should be without this handy guide. It's no substitute for your Vet but it will Save you Money. And help you quickly understand and recognize symptoms before they become a serious problem for your dog.

You can easily find a Spinone Italiano for sale on the internet. You can purchase one from a breeder or through a rescue or adoption agency.

The average Spinone Italiano price is around $2,000.

The price of a Spinone Italiano for sale can change depending on the breeder you choose to buy him from.

If you want to adopt a Spinone Italiano, you may be able to find one at your local rescue organization or adoption center.

There are several reasons why you may want to adopt a dog, rather than buy one from a breeder.

The first is, of course, the cost. Adoption is always way cheaper than buying from a breeder.

Another is because you can adopt an older dog and skip all that annoying stuff (housetraining, chewing) that you would have to train a puppy not to do.

Unlike some of the rarer breeds out there, you can easily find a Spinone Italiano breeder on the internet. It goes without saying that you shouldn’t just settle on the first breeder you find.

For instance, if you were to conduct a search for “Spinone Italiano breeders California,” you would see a pretty lengthy list of breeders.

Make a list of the ones that catch your eye and prepare a list of good questions to ask.

Some of the questions you should ask include whether the breeder has had the puppies certified and whether they have socialized and/or trained their dogs.

Conclusion: Why the Spinone Italiano?

The Spinone Italiano is a good mix of family dog and hunter dog.

He may look more like a wise old grandfather, but when he puts his mind to it, he can hunt big game better than the rest of ‘em.

His coat may seem like a chore to groom, but he’s actually not too high maintenance. Hand strip him and trim him regularly to keep him looking his best.

A quick note: while there are many Spinones available for purchase, you won’t find as many by typing in “Italian Spinone for sale.”

He gets his true name – Spinone Italiano – from the challenging bush that game chooses as a hiding spot. Though, as the game soon find out, he gets his name because they can’t hide from him.