Pay Attention to These 6 Standard Schnauzer Temperament Traits and Behaviors

The Standard Schnauzer temperament varies, depending on the individual dog’s personality.

While some are soft sweethearts, others that are guard dogs are no-nonsense.

Some Schnauzers are high-strung, while others are more laid back. Their personality depends on the habits and feelings of the individual dog. 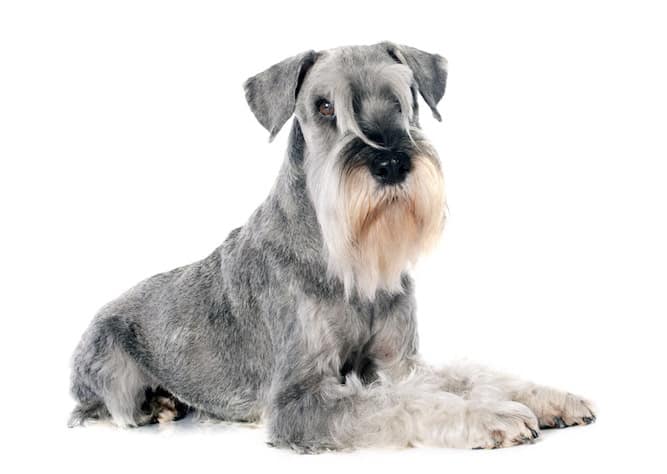 There are six “need-to-know” traits about the Standard Schnauzer temperament.

Read on to learn about each:

He is always tuned in to how his family is feeling and seems to know exactly what you’re going through.

He loves to be physically near his family whenever possible, which is why he is a dog that should not be kept outside.

He is very trainable, so long as you establish yourself as his pack leader.

If not, he will walk all over you and can become very demanding. 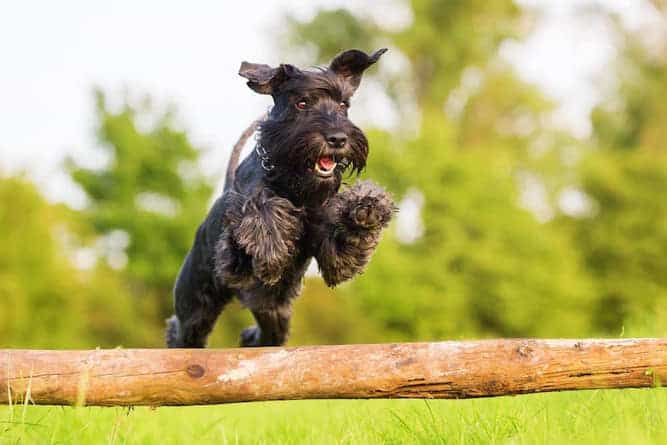 He’s a great dog to have around if you do a lot of fun, family-oriented activities.

He’s never happier than when he can join everyone on one of their excursions.

Most Schnauzers are friendly toward new people if they have been socialized at an early age.

If not, they may act aloof until they get to know the person better.

He’s a smart cookie, so if you don’t keep him challenged, he’ll go looking for his own challenges.

This never ends well, and often ends in destruction.

However, when it comes to problem-solvers, he’s one of the best around.

Schnauzers love to play, whether it’s with you or another dog.

He needs a brisk walk every day, and he must be able to go for a run several times a week.

Standard Schnauzer dogs started out as herding and working dogs in Germany.

Seems like the Standard Schnauzer has been around for a very long time. Some claim the earliest appearance of the breed is in German artwork dating back to the 14th century!

There are several variations of this breed as a result of Germans breeding them to hunt vermin and drive livestock.

Experts believe there are black Standard Schnauzers today because of a cross in its history with a German Pinscher and a black German Poodle.

And the reason for the gray in the Salt and Pepper colored Standard Schnauzers coat may have something to do with the German Pinscher's cross with a gray Wolf Spitz.

As with most dogs, early socialization is a must with the Standard Schnauzer.

This is especially true for dogs of the same sex, as Standard Schnauzers tend to fight with them.

The problem with training him is that he’s almost too smart for it.

He “gets” things faster than his trainer may realize. When his trainer continues teaching him the same tricks, he’ll look at him like “We’re still doing this?” 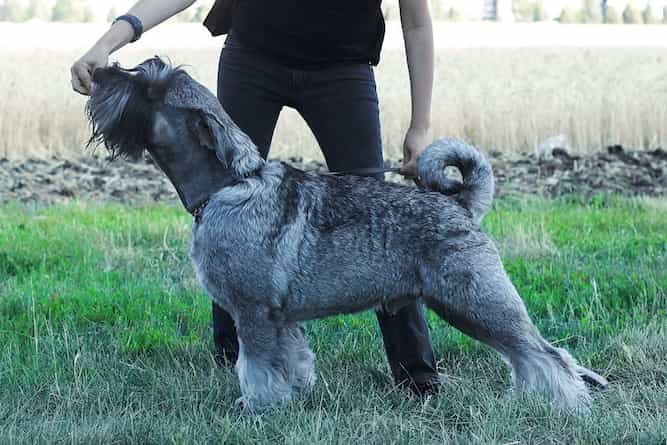 If you don’t train him, though, he will learn what he thinks he’s supposed to do on his own. This may not always be the way you want him to behave, so it’s important that you guide him.

If you are up for the fun of training your Standard Schnauzers then check out these The Online Dog Trainer.

Grooming a Standard Schnauzer is more intense than grooming other breeds.

You must wash their beards and legs every week. You must also make sure there is no dirt trapped in their foot pads, and you must regularly brush his teeth and trim his nails.

This is also one of those breeds that has a “double coat.” This means that he has a harsh outer coat and a softer coat underneath.

You should hand-strip his coat, rather than clip it. This will allow his coat to stay resistant to dirt, water, and other objects getting stuck in it.

If you clip his coat with clippers, his coat will become softer, and his color will lighten. So, for a Standard Schnauzer, black will turn to light gray.

Because of his playful nature, the Schnauzer loves to be kept busy doing fun things.

He loves when you involve him in family activities, like running along the beach or hiking through the woods.

Whatever you enjoy, your Schnauzer will be right there, getting in on the action with you. 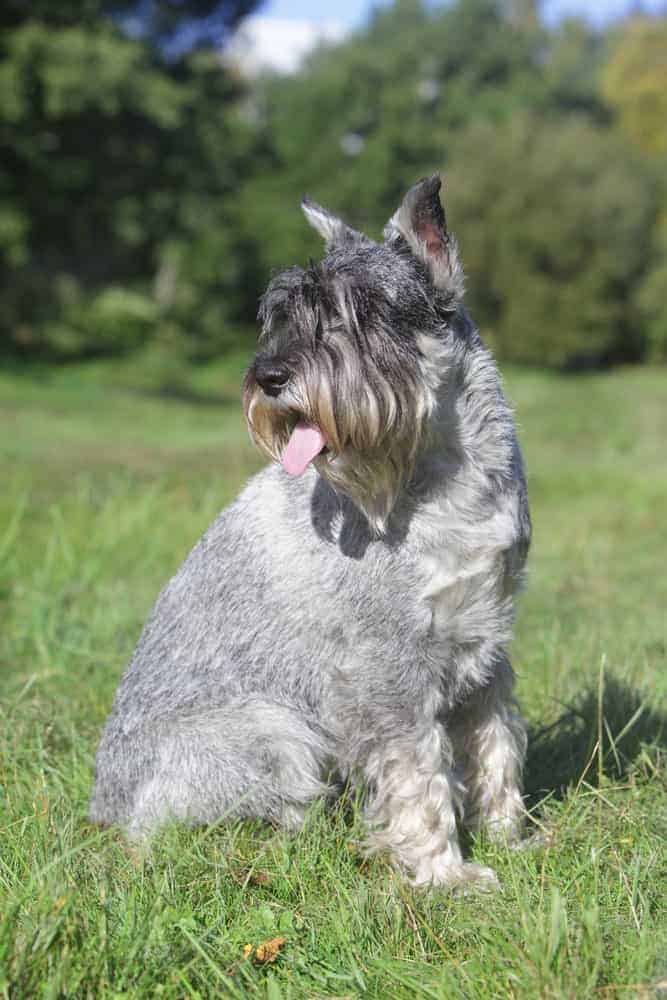 Most Standard Schnauzer puppies are healthy, but they are prone to certain health issues, such as:

An average Standard Schnauzer weight is between 31 and 44 lbs., no matter whether the dog is male or female.

The Standard Schnauzer's life expectancy is between 13 and 16 years.

That's a long lifespan for a dog!

But long life is not guaranteed so help him stay healthy by investing is a resource such as The Ultimate Guide to Dog Health.

Now that you know all you need to know about a Standard Schnauzer puppy, you may be considering purchasing one. But how do you do that?

You can find Standard Schnauzers either through breeders who specialize in the breed or through rescue or adoption agencies. 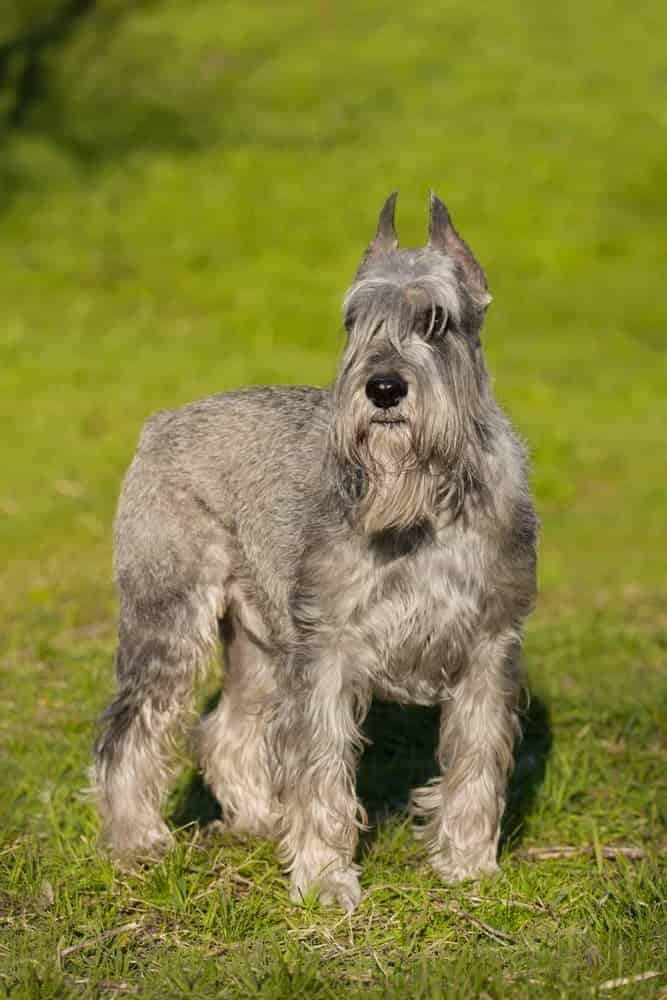 The average Standard Schnauzer price is around $400.

If you don't mind buying a dog that's not a puppy, Standard Schnauzers over two years old may cost between $75 and $400.

If you want to adopt a Standard Schnauzer puppy, check out your local rescue organizations and adoption centers.

A Standard Schnauzer rescue will always cost you less than if you were to purchase one from a breeder.

If you would prefer to have an older dog for a pet, you may want to take the adoption route.

More adult dogs are put up for adoption than puppies – plus, you won't have to deal with the chewing stage.

You can never be too careful when dealing with a breeder. Puppies are expensive, and when there's money in something, you can be sure there are people out there waiting to scam you.

A good resource to consult is The Standard Schnauzer Club of America.

In addition to providing information about the breed, there is a directory on the site where you can access a list of breeders in your area.

As the organization notes on its site, the best place to find a puppy is with a breeder who belongs to the club.

These breeders have met the necessary qualifications to put your concerns at ease that you aren't getting lower quality than you pay for.

Conclusion – Why the Standard Schnauzer?

The Standard Schnauzer’s temperament can make him a guard dog or a love bug. His temperament depends greatly on his personality.

He’s a playful pup who’s up for whatever challenge you want to throw at him.

He’s also incredibly easy to train by nature, but his intelligence may put a damper on things. For instance, if you’re trying to teach him the same thing over and over, he’ll get bored and think you're stupid!

Early socialization is everything. This will not only make him easier to train, but it will also be easier to have him around other people and dogs.

Grooming him is more work than it is for other dogs.

Important to remember is that you should hand-strip his coat, not clip it. Clipping it makes it softer, which may be nice, but it also reduces the coat’s ability to resist dirt, water, and foreign objects.

When compared to similar breeds, the Standard Schnauzer has a long lifespan, with some dogs living as long as 16 years!

He loves to be with his family, so don’t keep him outside.

He’s very aware of how you’re feeling, and so he always seems to know when you need a warm snuggle.

Next post: Redbone Coonhound Temperament: Energetic, Affectionate, Companionable & Everything Else You Need To Know

Previous post: Pharaoh Hound Temperament: Must Know Info and How to Bring One Home