Welsh Springer Spaniel Temperament: What’s It Like & Why Know Em?

If you want a sweet, energetic dog breed that enjoys the company of people and other dogs, you definitely want to know all about the Welsh Springer Spaniel temperament. If you have an active lifestyle and want a loyal, loving companion to take hunting or on long walks, you may want a Welshie. The Welsh Springer Spaniel temperament is light-hearted and enthusiastic, and you may just fall in love with them. 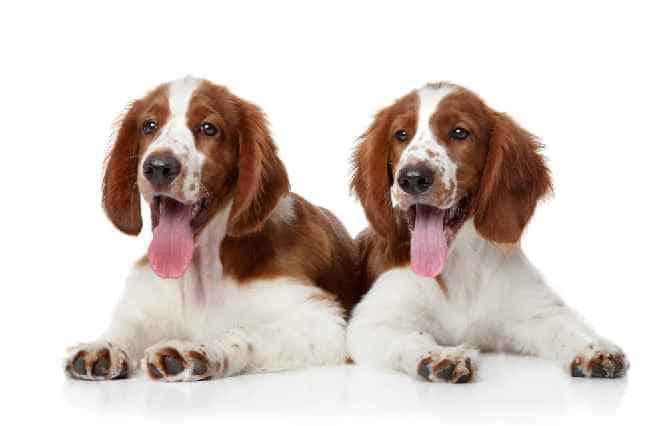 The Welshie is among Britain’s oldest sporting breeds, and because of its pleasant temperament, they also make a great pet.

Some people call this breed the Velcro Dog because they stick to their family. They are gentle, they like to be around people, and will follow you everywhere you go–like an adorable shadow.

Since they are an intelligent breed, the Welsh Springer Spaniel can be stubborn. However, training them as early as possible can help.

The Welsh Springer Spaniel temperament has been described as even, so if you can be patient and affectionate with this breed, you will have a better time with training. 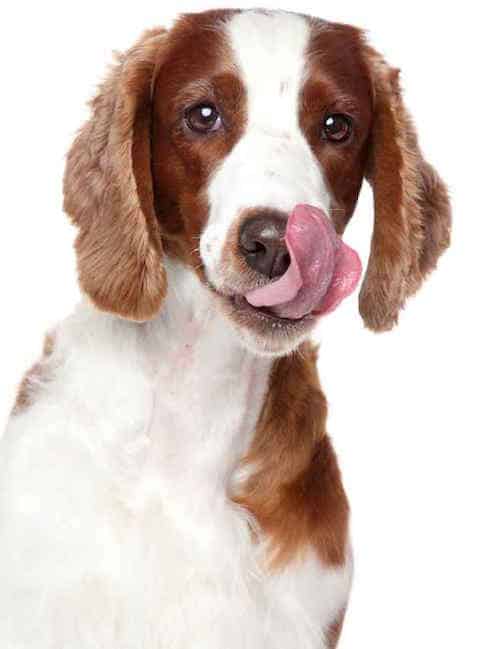 Welshies are the oldest spaniels in Britain. Historians have been unable to pinpoint exactly how the breed arrived in Wales coming from Spain. However, they have found that Welshie-looking dogs appeared in British art and literature as early as 250 B.C.

Also during that time, the breed was known as a Land Spaniel. Future Welsh Springer Spaniels may have traveled with Spaniards, eventually settling in the Welsh valleys.

The term “springer” refers to when the Welshies, then-called Welsh Starters, were used by hunters to “spring” game. Later, the Welshie would be known as the Welsh Spaniel and considered part of the Cocker Spaniel class.

As early as 1865, there is a dog breed known as the Welsh Cocker Spaniel, which had a solid dark color. In 1900, the first photos of a Welsh Springer Spaniel appeared after a dog show. Certainly, this is a resilient breed!

The Welsh Springer Spaniel is a lovely-to-look-at dog of medium-size, which means they are relatively easy to handle.

The Welshie has a sturdy frame and mid-length legs, so they run fast and can endure a lot of physical activity. 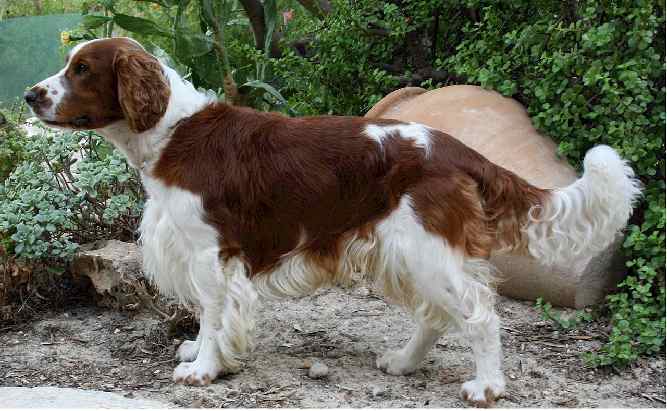 They are a hunting breed with angular forequarters and strong hindquarters.

Their soft white coat has red spots and is practical; it protects them from wind and weather.

Unlike other spaniels, the Welshie has a pointed head, adding to its unique look.

They have pale brown or gold colored eyes and small, mid-length ears that look like red-brown hair. They can have a black or pink nose.

Experts recommend brushing the Welshie's coat twice a week, and/or after they spend time outdoors. Their coat is long, straight, and silky, so it can get tangled easily.

From their ears and limbs, the coat hangs a bit with a “feathered” look. Instead of a brush, experts recommend using a steel comb to gently untangle those sections.

And since this breed has an even temperament, taking them to a groomer should be no problem and can offer specific care for the coat.

The Welsh Springer Spaniel shedding is moderate when compared to other breeds. 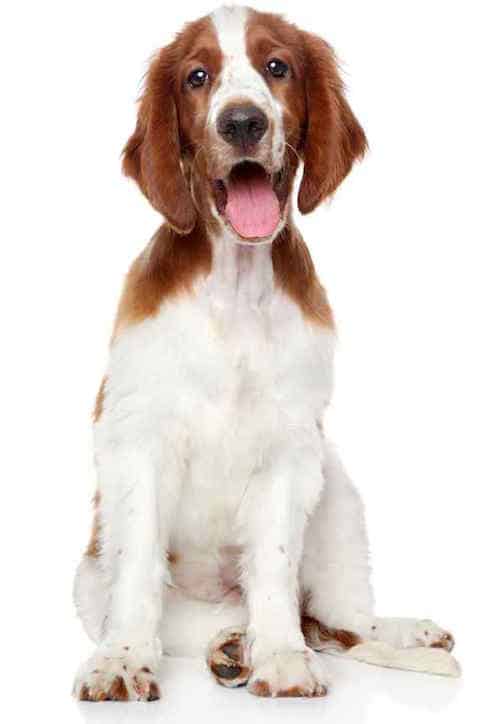 The Welsh Springer Spaniel size will depend on the sex of the dog.

The male Welshie stands about 18 to 19 inches tall at their withers, and the female Welshies are a bit smaller, standing at around 17 to 18 inches.

The Welsh Springer Spaniel weight can range between 35 to 50 (female) and 45 to 60 (male) pounds on average.

In addition, the Welshie has slightly webbed feet, which makes them good swimmers.

The Welsh Springer Spaniel or “Welshie” is an energetic dog with a pleasant personality. 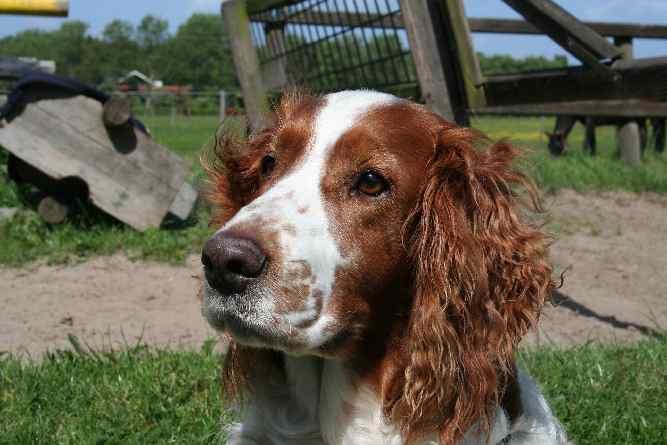 The breed is known as a loving, smart dog that is eager to please. This makes them fast learners, and they remember what they've learned as well.

Some dog breeds bark at everything, however, the Welshie tends to bark for a reason. They are protective of their loved ones and where they live.

The Welsh Springer Spaniel temperament is affectionate, and they become very attached to their family.

When Welshies are outdoors, or “in the field,” that is when they are happiest.

The Welsh Spring Spaniel temperament betrays what a rugged dog they are, and how well they can handle rough terrain.

Like most sporting breeds, they have an astounding ability to hook onto a scent. While on the hunt, the loyal Welshie will stay close to its owner, and if you are not a hunting family, you can please your Welshie by taking them on long walks. 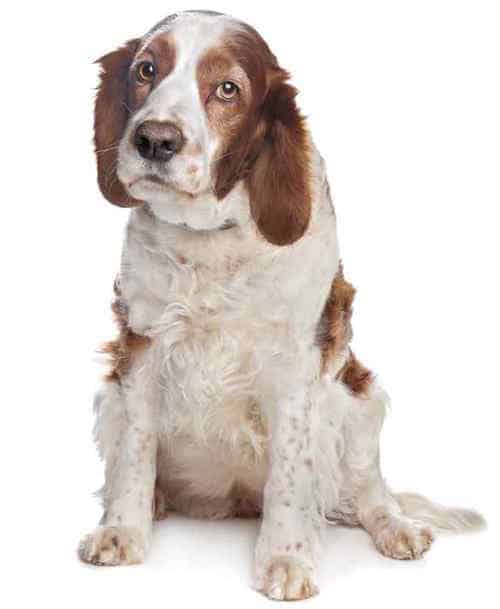 Welsh Springer Spaniel – Not Too Cheerful

One caveat: because the Welsh Springer Spaniel loves people, they may suffer separation anxiety when left alone. However, since they also enjoy the company of other dogs, bringing a companion home for them may help with this problem.

In addition to their gentle temperament, the Welsh Springer Spaniels are a mostly healthy breed. Like other mid-size dogs, they can have issues with Hip Dysplasia.

Since the breed has long ears with a stringy coat, they can be susceptible to infection, especially if your dog spends time in the water.

Unfortunately, Welshies tend to have thyroid problems and diseases of the eye.

For example, they are susceptible to Entropion, a disorder that causes the eyelids to turn in. When the eyelashes touch the eyeballs, your dog may start scratching. This can lead to damage to the cornea.

A genetic predisposition to glaucoma can also cause problems for this breed. Of course, being proactive will help. And, you will want to take your Welshie to the vet for regular checkups, shots, and overall health assessments.

Note: Few things are more important than our Health. It's no different with our Dogs Health. Some visits (and Money) to your Vet can be avoided if only you know what to when your dog is ill. The Ultimate Guide to Dog Health is the answer. No dog owner should be without this handy guide. It's no substitute for your Vet but it will Save you Money. And help you quickly understand and recognize symptoms before they become a serious problem for your dog. 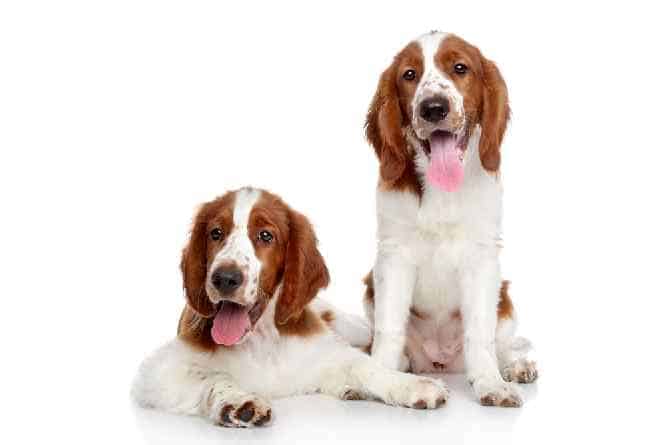 Even as a puppy, the Welshie shows its jovial personality.

They feel affection for their owners and are polite to strangers. Welshie puppies are inquisitive and vivacious.

It's as though they know they are going to be great hunting dogs, getting themselves in shape for later.

If you wish to find Welsh Springer Spaniel puppies for sale, visit the AKC Marketplace, it is a helpful resource for this purpose.

When it comes to training your puppy, choose praise over rigidity. Although the Welshie is headstrong, they do well with consistency and rewards.

Start training as soon as possible, because the puppy is like a sponge. By eight weeks, they will have already retained what you’ve taught them.

Their inquisitive nature, however, makes them want to challenge you. Experts recommend early socialization, including meeting with other puppies and attending training.

When gauging the Welsh Springer Spaniel puppies cost, it's helpful to realize it will vary when considering the location of the breeder, the sex of the puppy, and whether you plan to have a pet or a dog to show.

The Welsh Springer Spaniel temperament should be top of mind even for a puppy. If you have other dogs, have them meet the puppy before you commit. 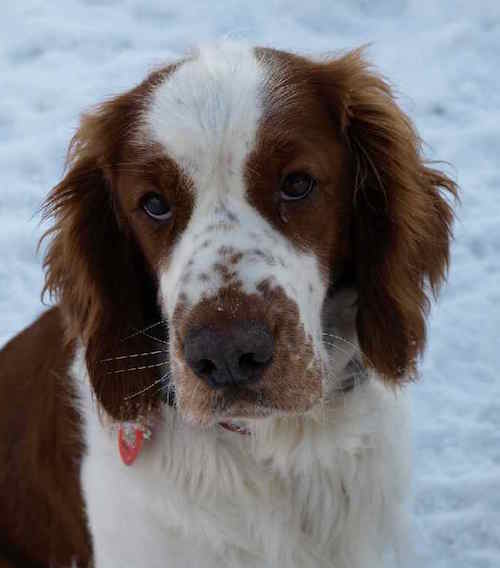 Keeping in mind that starting with a puppy is an enormous responsibility, including training, exercise, and time, you may want to adopt a grown Welshie.

More than likely, the adult has had some training and may be more relaxed. In addition, when you adopt an adult from a shelter, you will have information on their temperament, health, and personality.

The Welsh Springer Spaniel price from a breeder can run from $1500 to $3500 according to adoptapet.com.

It is recommended that if you plan to adopt an older dog, ask breeders about former show dogs because they will be well trained.

There is a WSSCA Breed Rescue Coordinator for the breed. Visit the Welsh Springer Spaniel rescue website for more information.

It's probably no surprise that reputable Welsh Springer Spaniel breeders are a discerning bunch.

They require a rigorous testing process, including in-person interviews for people who wish to adopt this affectionate breed.

welsh springer spaniels4However, before you find a reputable breeder it may be difficult for you to know which ones are legitimate.

Before you contact a potential breeder for a Welshie, experts recommend perusing their website, looking for how many puppies are available at all times, and how many litters are on the property. 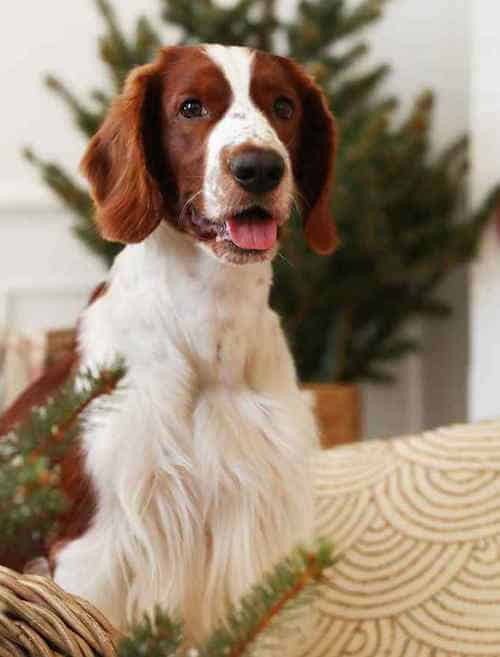 Too many puppies is a red flag. Obviously, if a breeder agrees to sell you a puppy without official papers, that is a reportable offense.

One other warning: you will want to meet and interact with your puppy before making a commitment to buy. If a breeder wants to “ship” you a puppy, you will want to find a different breeder.

The latter breed is smaller, and it has red markings on a white body.

Both breeds have notable hunting abilities, including being good “springers” at game.

Some breed experts posit that the Welsh Springer Spaniel and the Brittany Spaniel are longtime family members. The breeds are similar in size and coloring.