The Welsh Terrier temperament makes him a spunky, energetic little dog. Small dogs often get a bad rap for being “yappy” dogs. But the Welsh Terrier is far from a yappy dog. 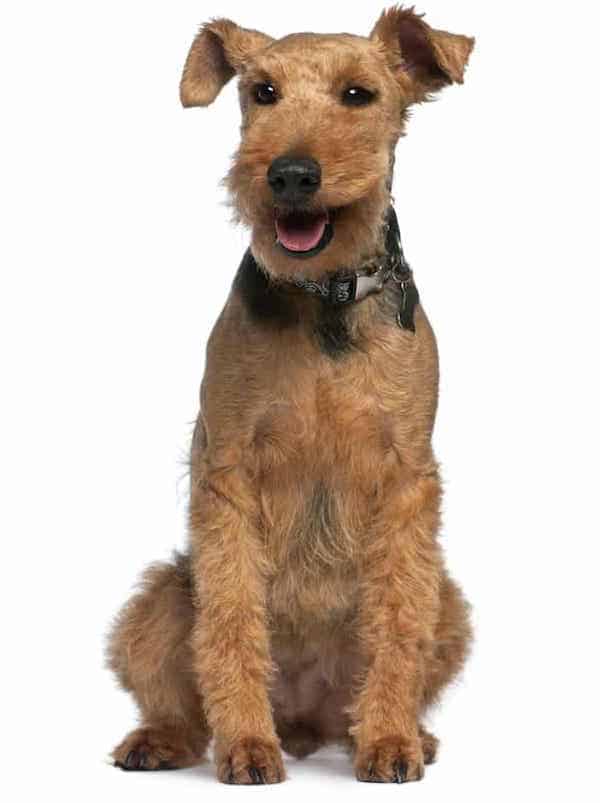 He may be small, but he doesn't feel the need to overcompensate. He just wants his yard, his ball, and someone to play with.

There are four “need-to-know” traits in particular about the Welsh Terrier temperament.

Keep reading for more information about this spunky little dog.

This is a dog that likes to party! He can't be bothered to stand around, yapping at nothing, when there's a ball he could be chasing after.

Want to play tug-of-war? Grab the rope! Want to play hide-and-seek? Okay, but only if he can be “it”!

He's got a lot of spunk, and he uses it wisely. He's not a nervous energy kind of dog. He'd much rather put that energy toward playing!

He also has a high prey drive, so if you live in a house with cats, he is likely to stalk them. 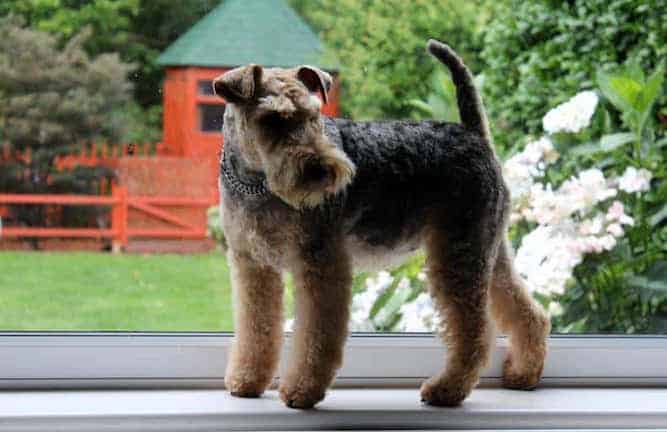 You might not think so, but the Welsh Terrier can actually be a fantastic little watch dog.

While you would have to probably protect him in the event of danger, he will still let you know if he thinks something's amiss.

During training, teach him the dos and don'ts of barking. He's not a yappy dog by nature, but teaching him to bark when it truly matters will reduce the number of false alarms.

Plus, you won't have to hear about it from your neighbors if your dog is only barking at a perceived threat.

(It helps when he knows that something as simple as leaves blowing in the wind is not a threat!)

Welsh Terriers may appear at first glance to be your average terrier dog. However, the Welsh Terrier is much less uptight than his cousins.

He doesn't see the sense in picking fights with other dogs. He doesn't need to establish his dominance by challenging dogs who are bigger than him.

He just wants to enjoy his day and have a good time with his family before he goes down for the night with some belly rubs.

Welsh Terriers are friendly by nature, even with other dogs.

However, he will not shy away if a big dog gets in his face either. If he is challenged, he will take that challenge – regardless of the dog's size – but he will not go looking for trouble.

Socialization is key here, too. A dog who is properly socialized from an early age will be more amenable to other people and dogs.

However, the Welsh Terrier, in particular, can become dog aggressive if not socialized early enough. So definitely bring him to as many dog parks, and around the neighborhood for as many walks, as possible while he's young.

Over time, he will learn that just because he doesn't know a dog, that does not necessarily mean that dog is a threat to him or his family.

Breeders in Wales originally bred the Welsh Terrier to hunt game like foxes, rodents, and badgers.

However, over the last century, the purpose for breeding the Welsh Terrier has mostly been for show.

Research shows that the Welsh Terrier is actually the oldest dog breed in the U.K. that is still alive today.

The Welsh Terrier is one of the best dogs to own as a first-time dog owner.

This is because his temperament makes him easy to train. 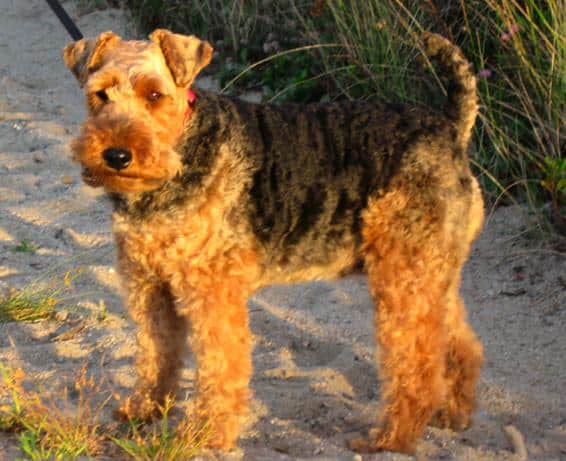 He may have a slow start at first, as many terriers do. He may refuse to listen at first, but once he realizes there's something in it for him, he'll be more than happy to comply.

Treats are effective at getting him to listen but don't overdo it. You don't need him getting overweight.

Be consistent and firm. The Welsh Terrier will make himself the leader of the house if you don't establish that there already is one, and it's you – not him.

If you are up for the fun teaching your Welsh Terrier what's good behaviors and also new tricks then check out these FREE Dog Training VIDEOS.

The coat of the Welsh Terrier is similar to the coats of other terriers in that, to effectively care for it, you must hand-strip it.

Clip his coat every 8 to 12 weeks, except during colder seasons when you should leave it longer to keep him warm.

Trim his nails at least once a week, and brush him once or twice a week.

You don't typically need to bathe him between clippings. If you do bathe him, though, use a quality dog shampoo that contains moisturizers.

Welsh Terriers have a lot of energy. As such, you should exercise him appropriately.

A great way to exercise him is to play ball or fetch in the yard with him.

Walk him for a good long walk at least once a day, and give him plenty of time to run around the yard each day.

Once he is an adult, let him run and play until he's tuckered out, but not exhausted. You don't want him to feel run down.

You may find yourself chuckling at the tight spaces he can get himself into. For this reason, he should not be left unsupervised for too long, and he should be in an enclosed yard with a secure fence.

A typical Welsh Terrier size is between 20 and 22 lbs.

The average Welsh Terrier lifespan is between 12 and 15 years.

That's a lot of years and most Welsh Terriers are healthy dogs, but there are still certain health issues you must watch out for, like:

A good resource to help you on your healthy, lovely journey with your Welsh Terrier is The Ultimate Guide to Dog Health.

So you've decided to take the plunge and make a Welsh Terrier puppy a member of your family. Now what?

Rescue and adoption agencies may have a Welsh Terrier for sale. Else you may need to go through a breeder to get the exact dog you're looking for.

The price of a Welsh Terrier varies, depending on who you choose to buy him from.

The average Welsh Terrier price is around $800.

This price is not set in stone. The price of a dog can vary based on where you get him from.

Some Welsh Terrier puppies can cost as much as $1,200.

A higher cost may be because the dog comes from a high-quality bloodline. It can also be because the specific color or breed of dog is rare or otherwise difficult to breed.

If you want to adopt a Welsh Terrier puppy, you can find one through a local rescue organization or adoption center.

Welsh Terriers for adoption will always cost less than one purchased from a breeder. 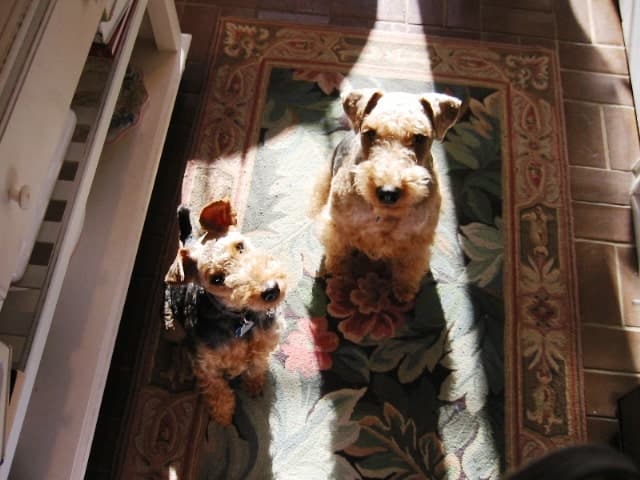 A Welsh Terrier Rescue or adoption is perfect for you if you are interested in getting an older dog.

This is because there are always older dogs available to adopt or rescue than puppies.

If you're interested in getting a Welsh Terrier puppy from a breeder, your best bet is to go through the AKC Marketplace.

Breeders who are officially registered with the American Kennel Club are usually more reputable than someone selling dogs out of a box on the street.

With an AKC breeder, you should receive all of the necessary paperwork to ensure that the puppy you are purchasing is happy and healthy.

If you cannot find a Welsh Terrier, but you're stuck on the Terrier breed there are tones to choose from:  You can start with these:

Conclusion: Why the Welsh Terrier

The Welsh Terrier stands out among terrier breeds because of how he uses his playful energy for good.

He's intelligent, which makes training easier. But intelligence can also lead to stubbornness.

Show him who the boss really is, and don't let your guard down. You can teach him to respect you and listen to you if you remain vigilant in your efforts.